An embroidered artistic book that talks about the 'Diablada' in Peru

Nereida Apaza Mamani is a poet and visual artist who has lived between the cities of Arequipa and Puno, in Peru. This artistic book called 'La Diablada' (2019) is inspired by Apaza's experience of taking part in the La fiesta de la Virgen de la Candelaria.

The title ‘La Diablada’ refers to one of the dances from this celebration which is originally from Puno, south of Peru, a place that is considered the folkloric capital of the country, due to the number of dances from that region. This is a highland area, which the artist represents in the embroidery as mountains on which we see the dancers perform La Diablada.

During La Diablada, a group of people dance dressed in colourful costumes that resembles the iconography of the devil. These are embroidered by Apaza Mamani, who delicately draws characters using white thread dressed in traditional costumes and masks. This dance combines two different worlds: the Catholic and the profane, the devotion to a Virgin and the ritual to Mother Earth. The peasants perform this dance, which takes place in the month of February, to ask the intercession of the Virgen de la Candelaria for their crops of potatoes, quinoa and barley to prosper.

The artist represents these two worlds by stitching the Virgen de la Calendaria’s face on the mountain, under where the peasants are performing their dances. Apaza Mamani’s prayer refers to the peasants’ wish for their crops not to be destroyed, highlighting also the importance of women: she mentions both women and earth are capable of giving life.

The British Museum holds some costumes and masks of La Diablada, from which the artist took her inspiration in content, and as a means to learn about other embroidery techniques. Take a look at the digital version of ‘La Diablada’ by clicking the image.

If you want to read more about Nereida’s project with SDCELAR, click here. 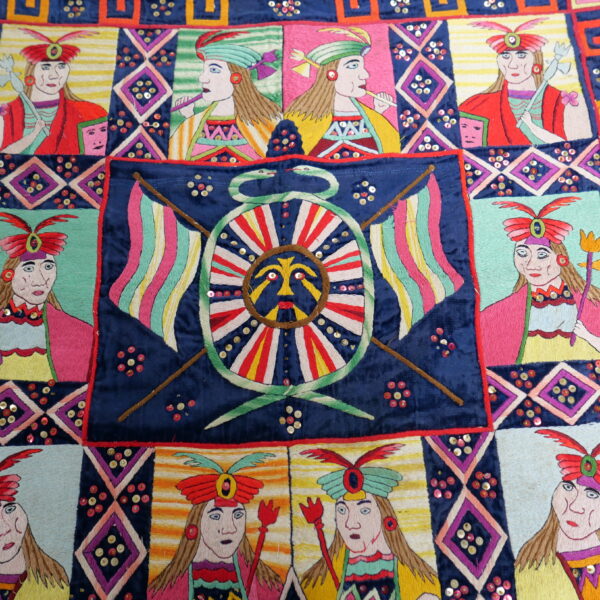