“I saw the things that were made by my elders, and I was healed” Oscar Romualdo Román Jitdutjaaño

In 1903 the British Museum received around 100 objects collected from the Murui-Muina (Witoto) people in La Chorrera in the then Peruvian, now Colombian, Amazon. French explorer Eugène Robuchon had sent the objects to the Museum, along with a travel journal. Robuchon died shortly afterwards in the rainforest. The Murui-Muina (Witoto) people were among the groups which came near to extermination during the period of brutality related to the escalation of rubber extraction promoted by the Peruvian Amazon Company (PAC). It was during this same period that these works were collected, transported and accessioned.

The Amazonian rubber boom (1885-1930), fuelled by demand in the industrial world for this raw material that was used in the production of cars and machines, resulted in the exploitation of the region’s Indigenous peoples. The exploitation of rubber workers took various forms, ranging from debt peonage and relative autonomy to enslavement, torture, rape and genocide. The most violent episodes during the boom under the PAC reduced the Bora, Muinane, Miraña, Nonuya, Ocaina and Murui-Muina population to a tenth of its size between 1900 and 1930. In the years following the escalation of the boom, these people were displaced from their ancestral territories. Many escaped and chose to live tribal lives, while others resettled along the banks of the Caquetá, where they worked in the timber industry, traded with white settlers and sent their children to Catholic boarding schools. The cultural landscape of Western Amazonia was torn apart and reconfigured, leading to culture loss as well as new encounters between communities from the big rivers and those from smaller tributaries. 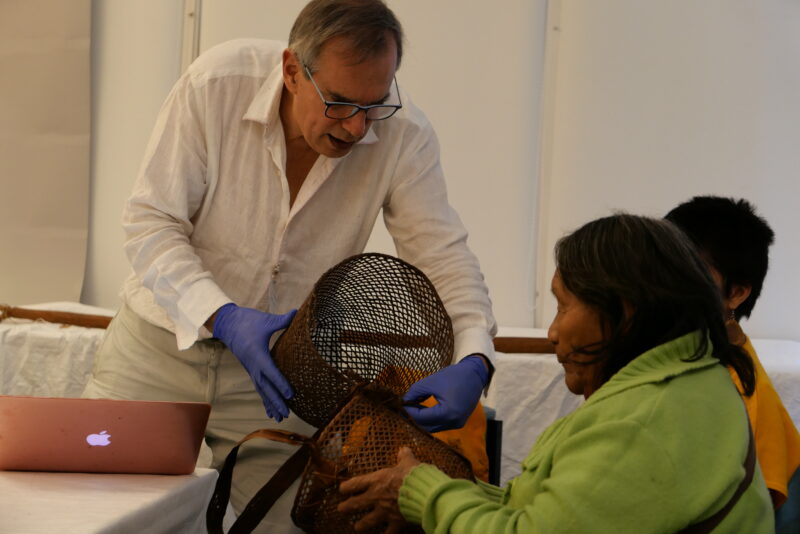 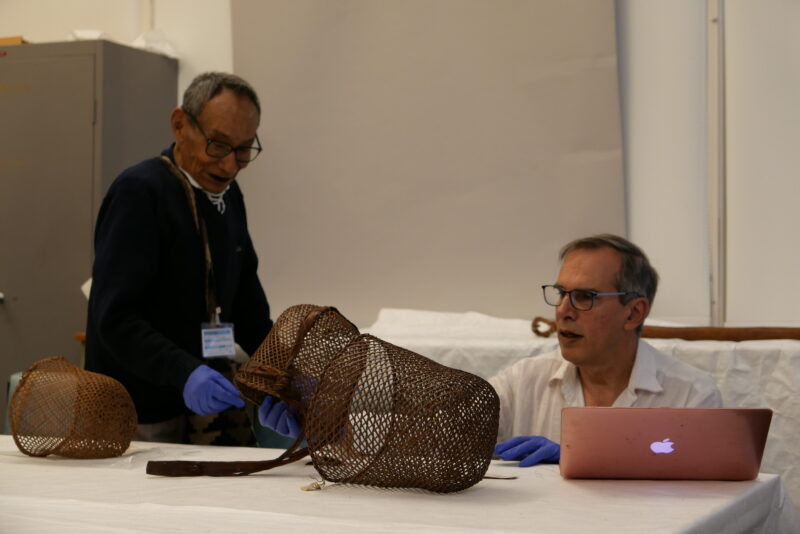 The research project on this particular collection is being developed by two Murui-Muina elders, Oscar Jitdutjaaño and Alicia Sánchez, together with Juan Alvaro Echeverrí, Professor at the National University of Colombia in Leticia, and the Santo Domingo Centre at the British Museum. The aim of the project is to reconnect the works that the Museum acquired from Robuchon’s travels with elders who remember their parents and grandparents talking about cultural practices and the materials associated with them, which have been lost and/or forgotten as a result of the rubber boom genocide. Juan Alvaro Echeverrí, has published extensively on the Putumayo region and Eugène Robuchon, and edited the book that was published in his name although it had been heavily re-written by the PAC: ‘Eugène Robouchon, en el Putumayo y sus afluentes’. He and Oscar Jitdutjaaño have published a number of articles on the plants and cultural ecology of the Putumayo region, where Mr Jitdutjaaño and Ms Sánchez live. They plan to publish a work as a response to their experience with the Murui-Muina collections at the British Museum, paying special attention to the works collected by Robuchon, as this collection was made at a pivotal and painful point in the history of the region. 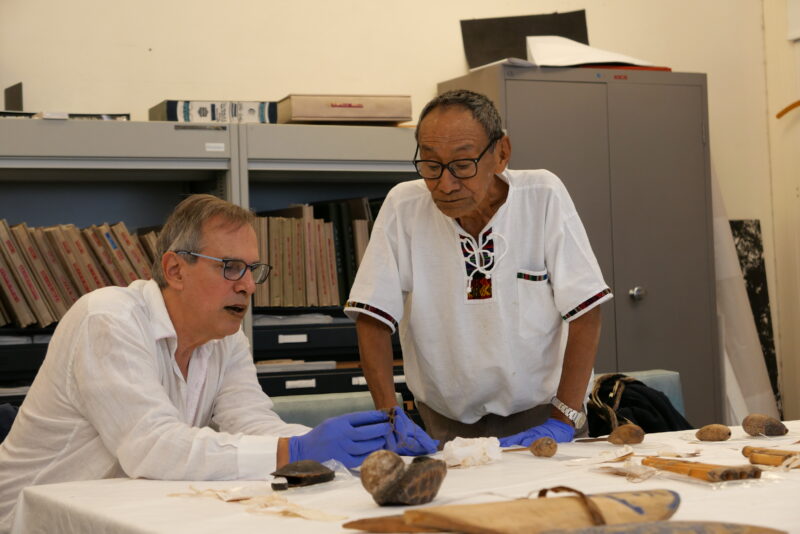 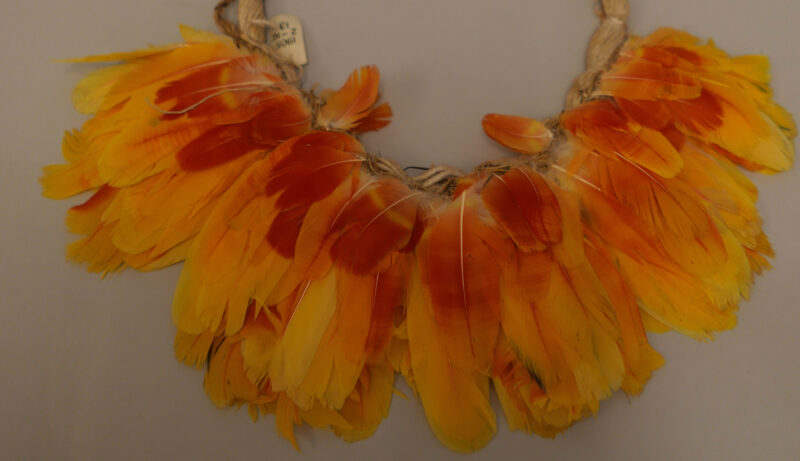 Oscar Jitdutjaaño, Alicia Sánchez and Juan Alvaro Echeverrí joined the Centre for workshops to design a display case in Room 24 (the Wellcome Trust Gallery) at the British Museum, which explores cross-cultural approaches to Living and Dying, using collections from Africa, Oceania and the Americas. Their work with the British Museum’s galleries and collections led them to name this project “House Of Shadows”. This title, roughly translated from Murui-Muina, reflects Mr Jitdutjaaño and Ms Sánchez’s impressions of the space. Community houses (or malokas) in their part of Amazonia are vaults that mimic the universe; they represent the covering of the world conceived as a vessel, while baskets are used as metaphors for the support provided from below. Together they make up the body of the world. Seasonal dances that take place in and around malokas re-create this world of agricultural cycles, and the relationship between events in the past, present and future. Within the Murui-Muina worldview, therefore, the Museum’s Great Court is a vault similar to that of a maloka. The objects on display are dissociated from their original contexts and so appear to be lifeless reflections or shadows of the cultures they seek to represent. 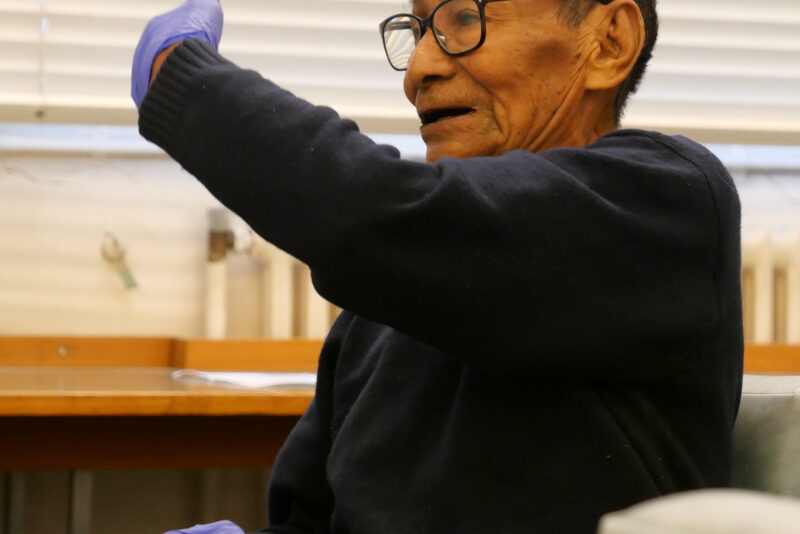 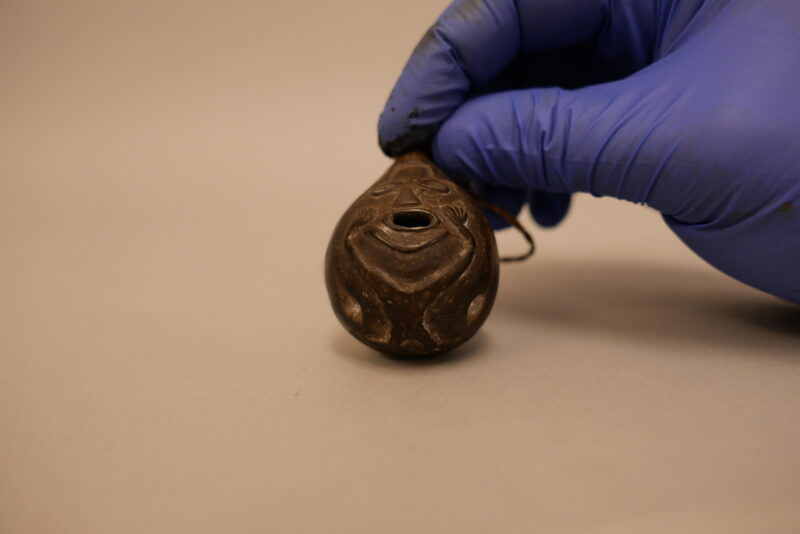 Am1905,0216.101 Tobacco resin container made from a chambira seed and used by Murui-Muina (witoto) people during ceremonies. Collected by Eugène Robuchon. ©Trustees of the British Museum.

The Murui-Muina collections held at the British Museum contain a number of tooth necklaces, made from animals such as wild pigs, jaguars, monkeys and dolphins. These teeth are gathered to harness the living powers of the animals from which they are taken. They are considered dangerous and are therefore kept far away from people at night, which is when they come alive and can disturb those nearby. Their power can be tamed by those who are knowledgeable and experienced, and can be used for healing purposes. However, once they have been damaged the living being inside them dies. All the tooth necklaces assessed by Mr Jitdutjaaño and Ms Sánchez were pronounced dead with one exception: one made from river dolphin teeth, here pictured. 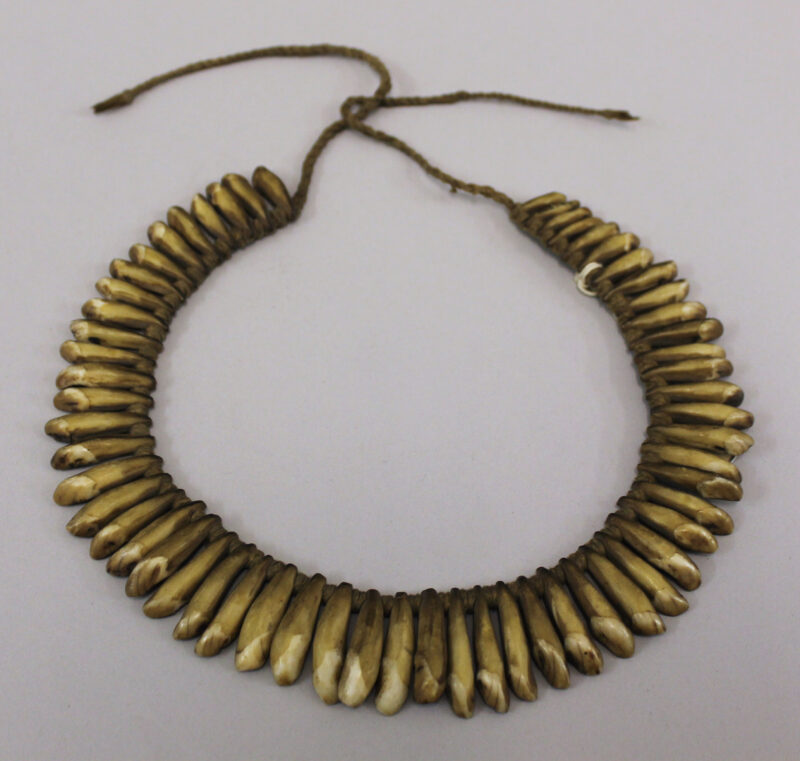 Am1925,0704.9 Tooth necklace (pink river dolphin) made by the Murui-Muina (witoto). ©Trustees of the British Museum. 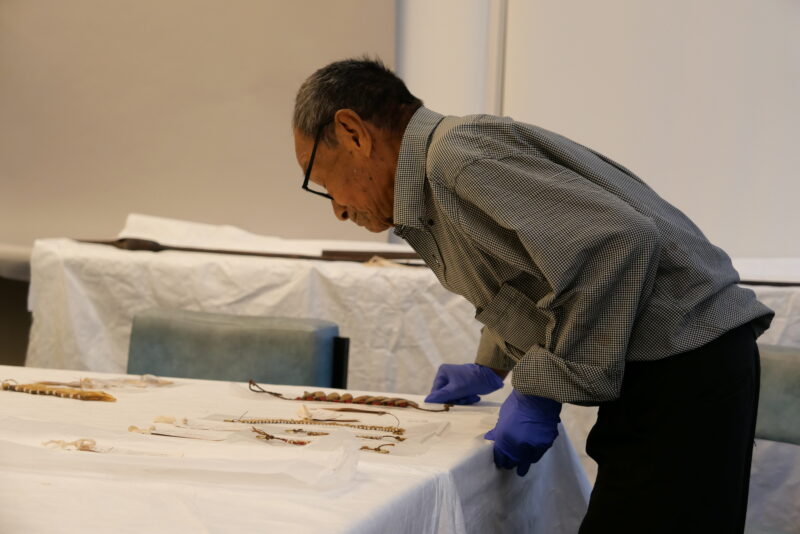 According to Murui-Muina people, river dolphins are shape-shifters, who can disguise themselves as men and women, and use other river creatures as their clothing. For example, an electric eel is changed into a belt, fish are made into shoes and a crab becomes a watch. They wear hats to disguise the blowholes on the back of their necks and, thus disguised, they attend parties and bars to seduce or rape their victims. Their teeth can be filed to produce a powder used for love spells. As dolphins are shape-shifters, their teeth cannot be used for healing. Although river people inhabit the entire Amazonian region, for the Murui-Muina, these disguised dolphins appear as white people; they are well-dressed, perfumed and wealthy. They are associated with the acquisitiveness and greed of foreigners in Amazonia, as well as the foreign diseases that are a product of cultural contact. As river dolphins live in the large rivers, they and the narratives and knowledge associated with them reached the communities that are removed from these large rivers (such as those in La Chorrera) as a result of the movement of people and ideas during the rubber boom. This necklace would have been a very new object when it was collected by Robuchon and sent to the British Museum. This living necklace embodies not only the power of river dolphins but also a point of cultural contact and trauma, splintering and annihilation as well as new knowledge and experience. 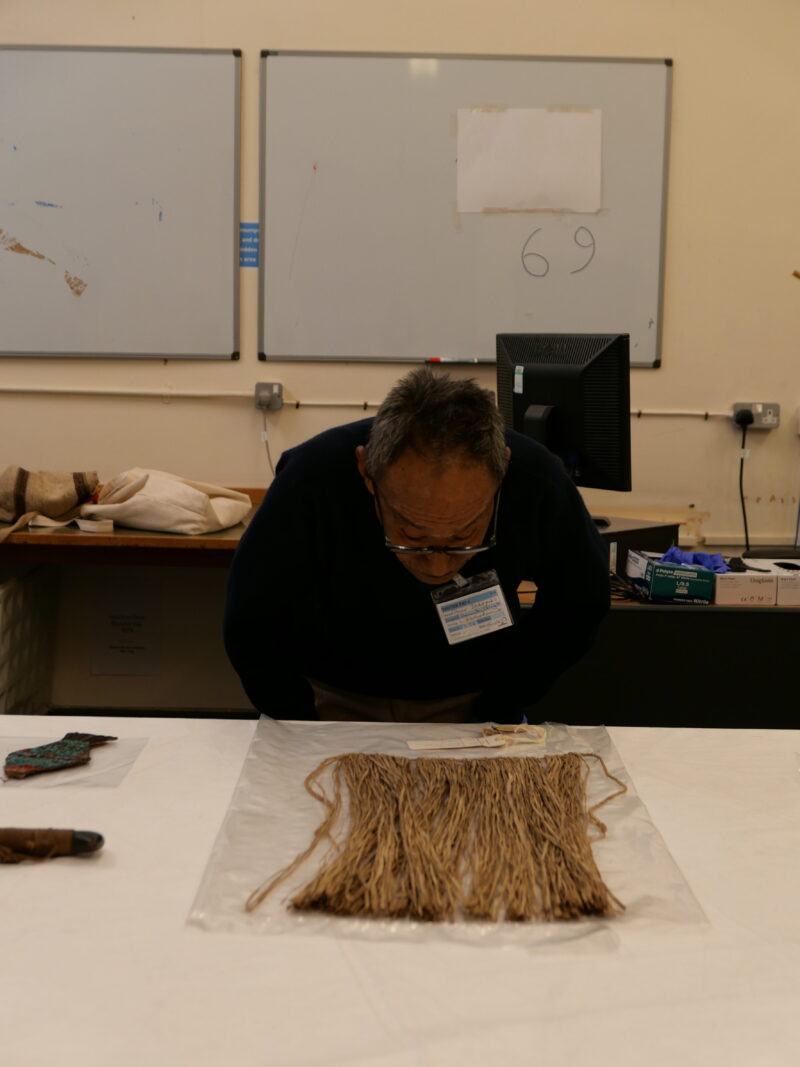 The Robuchon collection contains a number of crowns, each with a small layer of feathers located at the front of a woven palm circle (see pictured example). Younger members of the Indigenous groups from La Chorrera do not recognise crowns such as these as part of their tradition or cultural history. This is as a consequence of the rubber boom, during and after which these crowns were neither produced nor used. Not only did the material knowledge associated with these works disappear, so did the associated social positions, such as that of chief (or captain), who would have worn the crowns as a symbol of their rank and identity. However, Mr Jitdutjaaño and Ms Sánchez were able to identify them through childhood memories of elders from the community who described them and the ceremonies they were used for. 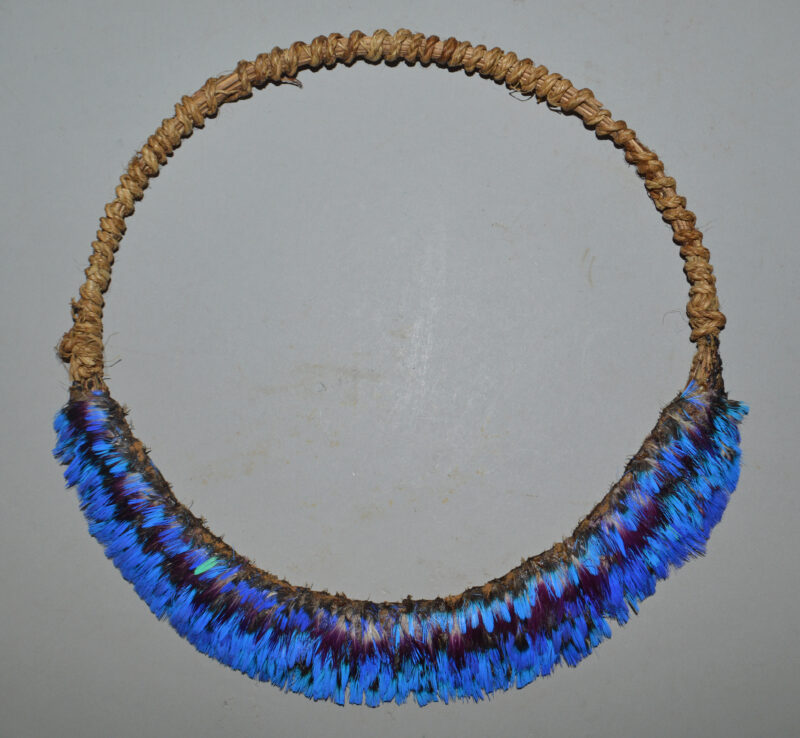 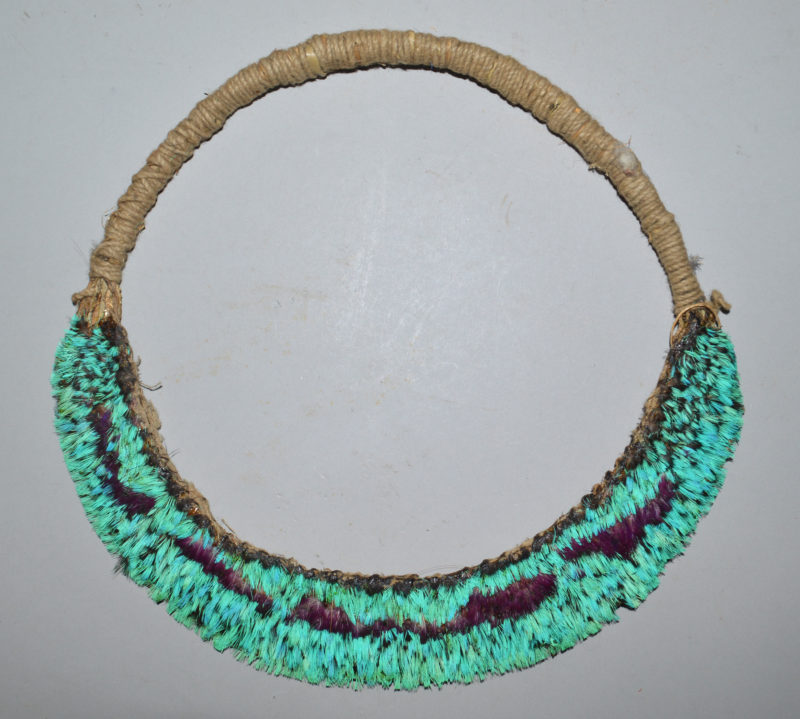 This collections project is the first organised by the Santo Domingo Centre. It illustrates the importance of the political dimension of the histories behind the museum’s collections and how this could be negotiated. The majority of the objects in the Murui-Muina collections have scarcely been studied and have not left storage since they were acquired. These objects were once part of everyday life or were used for ceremonial practice. They now embody the painful cultural rupture caused by the rubber boom. By re-examining this traumatic and transformative period in a region with a long and ongoing history of colonial activity, this project underscores the importance of the ever-changing meanings and values of objects through time. In this way, the Centre aims to highlight the value of museums beyond their collections. Robuchon intended these works to serve scientific purposes, but they can now facilitate intimate emotional experiences for the descendants of the people from whom they were sourced. We believe that plural, creative, and emotional relationships are vital in making museum collections relevant today. 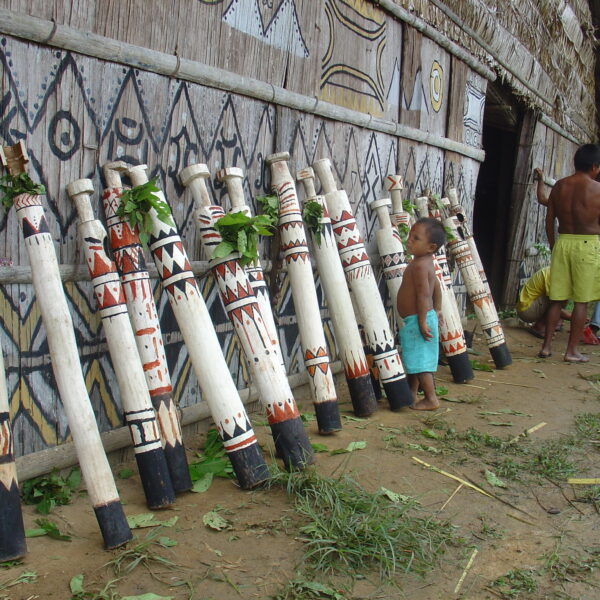 Malocas and the Annual Cycle 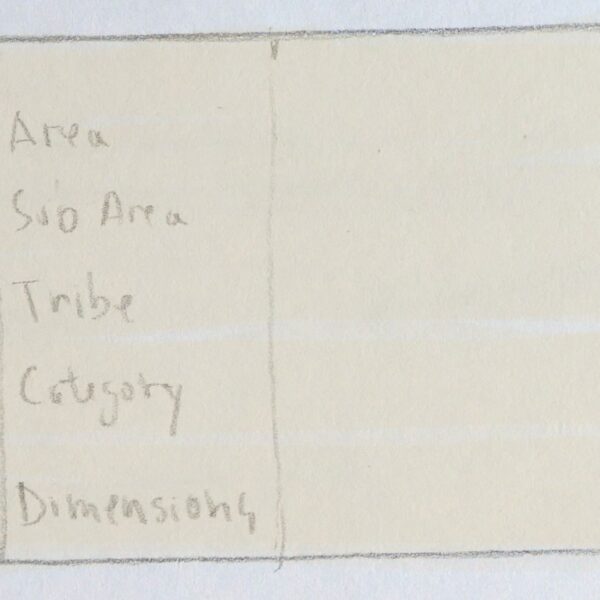 Chile, colonial practices in the past and present 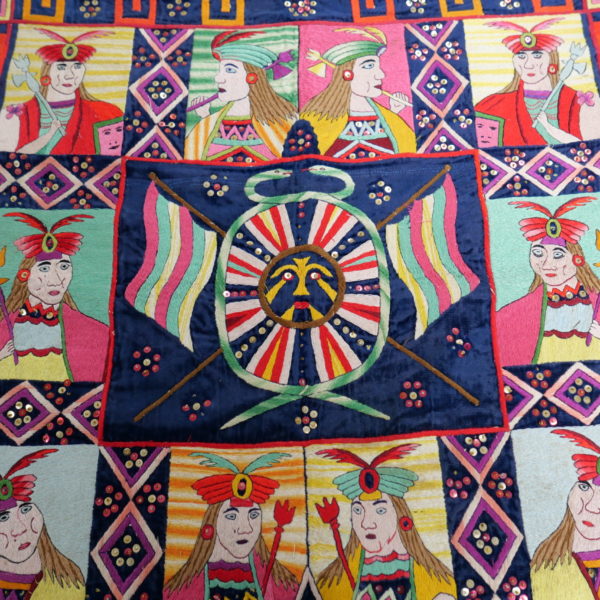