San Basilio de Palenque, in Colombia, holds the title of “the first free town in the Americas,” due to its founding at the turn of the seventeenth century, more than two hundred years before Colombia gained independence from Spain in 1810.

While men have typically dedicated themselves to the agricultural production of cassava, plantain, rice, corn and a nutrient-dense tubercular called ñame, women have become accustomed to the arduous task of peanut farming. The practice is both communal and intergenerational, as young children are invited along to pick nuts beside their mothers, aunts, grandmothers, and neighbours. The women believe that singing helps to release the nuts from the earth, so special songs are sung to help coax the protein-rich legumes from the soil. These songs employ the Palenquera language—the world’s only Spanish-based creole that mixes elements of Spanish, Portuguese, and Bantu languages from the Kikongo region of Congo-Angola.

This female-centred practice gathers women and children through ritualised song, story-telling, and ancient forms of subsistence farming that have allowed this community to survive for over four centuries. Tradition holds that the peanuts ought to be harvested during the first rainfall of the New Year, when the moist soil loosens the fruit. Once the land is cleared of weeds, the peanut plant is separated from the legumes which are buried only a couple centimetres beneath the surface. To harvest the nuts, women sit on the ground, legs flung to the side, and pierce the earth with a short, dull machete. The nuts are collected in metal bowls and then carried back to the village where they are spread out to dry, sorted, washed, and processed for eating.

At the turn of the twenty-first century, paramilitary activity intensified in San Basilio de Palenque and peanut farming decreased as insecurity in the remote farmlands attenuated.

Through processes of acculturation, out-migration, and discrimination, many young women from Palenque view peanut farming as an undesirable form of labour, bringing the activity almost to a halt. Today, only one woman continues to practice this once sacred, communal activity in Palenque. By failing to carry on the tradition of peanut farming, generations of women have missed out on opportunity to participate in female-centred forms of community empowerment, spontaneous manifestations of palenquero language, and the traditional oral histories and songs associated with peanut farming.

This documentary will be stored in the house of culture in Palenque, which has recording studio and library. Digital files of the video recordings will be uploaded to the school website to be accessed online, and the Benkos Bioho Technical and Agricultural School will be able to access digital files stored there.

A selection of 10 photographs will be chosen for a permanent exhibition in the Palenque house of culture, along with short testimonies of the women reflecting on their experience with peanut farming. 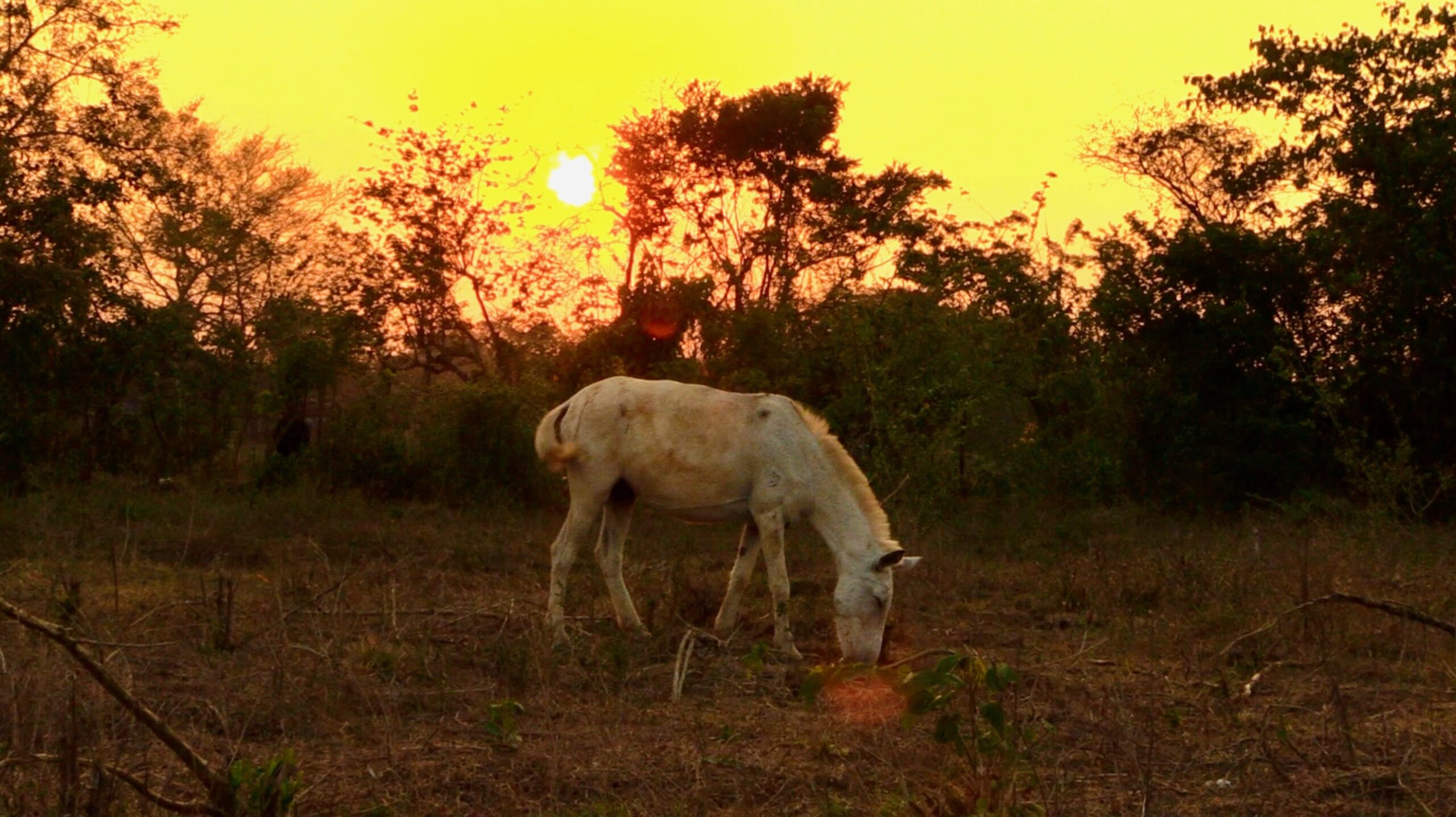 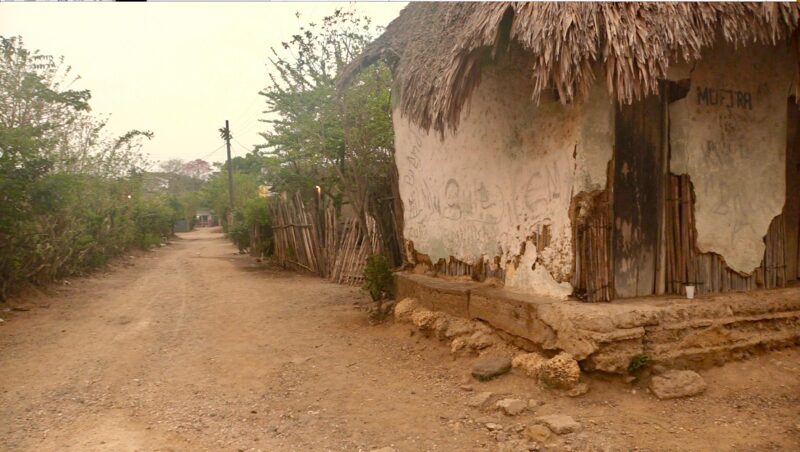 A stone foundation supports walls made of sticks stacked tightly together and bound in place using a mixture of earth and dung, secured by a palm leaf roof. These roofs were traditionally constructed communally, with men pitching in to construct the laborious structures for one family and then alternating to the next. Residents of San Basilio de Palenque live in the residential zone, while farming areas are located anywhere from 20 minutes to an hour hike outside of the village. 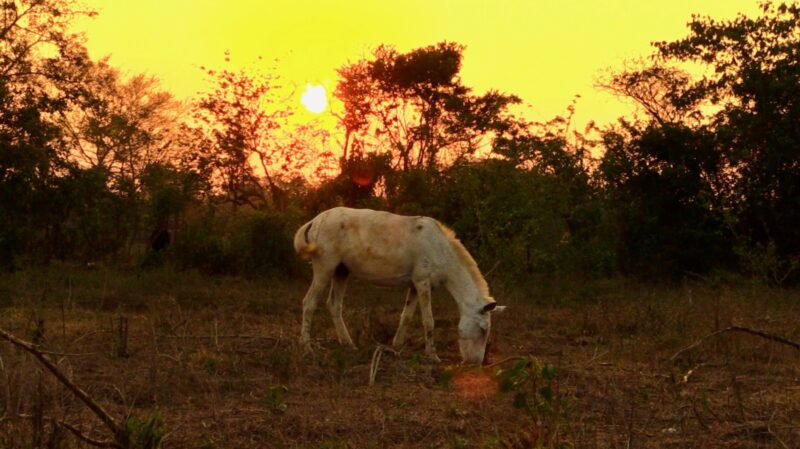 Due to Palenque’s arid climate, farmers leave their homes before dawn to gather materials and make their way into the fields. By the time the labour day begins, the sun is just rising, providing the minimal light needed to work while shielding the workers from the harsh rays of late morning and midday. In this image, a horse grazes as the sun is just beginning to rise over the nearby fields.

The journey from the residential village to the fields may traverse lush bush, or cleared paths such as this one. Large trees and vines line the path that marks the transition from unpaved streets and rustic homes into the expansive network of rivers, fields, and forests know as el monte (the bush). 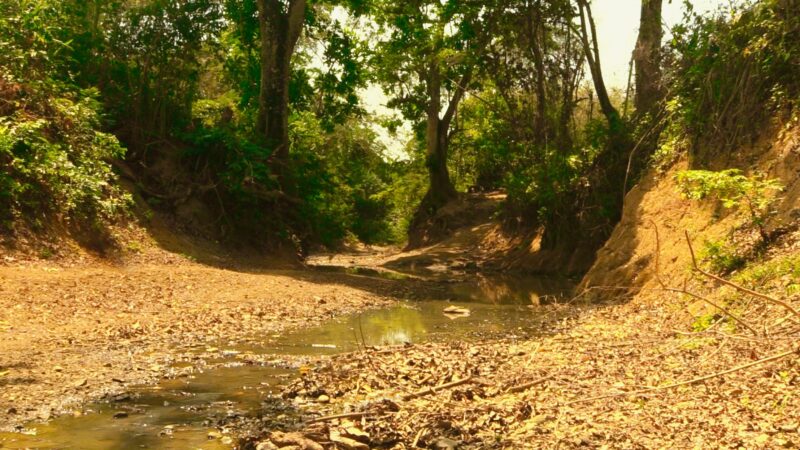 The ideal land for peanut farming maintains moisture, thus planting close to rivers such as the one pictured is ideal. 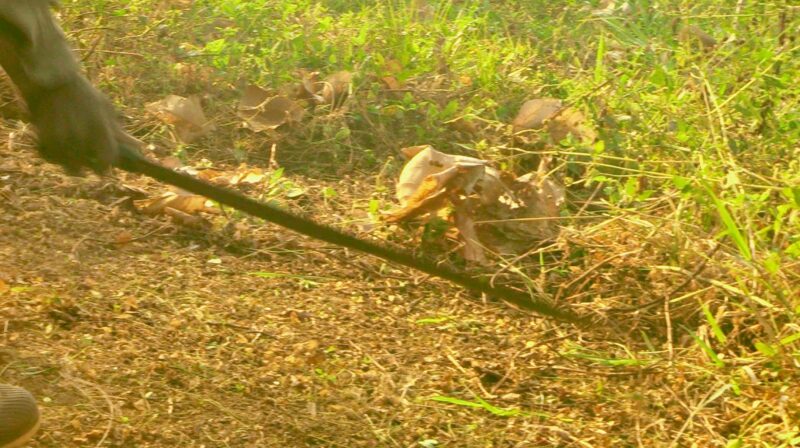 The first sign that peanuts have matured is when the green sprouts begin to sprout yellow flowers and slowly begin to dry. Once this occurs, the first step to collecting the peanuts is clearing the land. In this image, the land is cleared by hand by moving a long machete in swift motions parallel to the ground to release the plant from the legumes buried only centimetres below the ground.

While long, sharp machetes are best for cutting weeds, the preferred tool for peanut farming is a short machete whose blade has been dull enough to grab it tightly in the hand. These tools are often made by cutting an old, dull machete in half so that it is short enough to pierce the soil while sitting down. 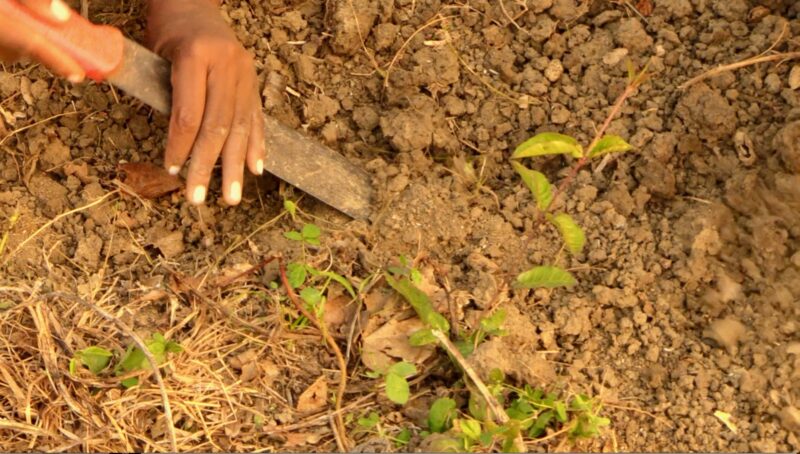 The shortened, dull machete is dug into the earth, loosening the soil to reveal the legumes just below the surface. 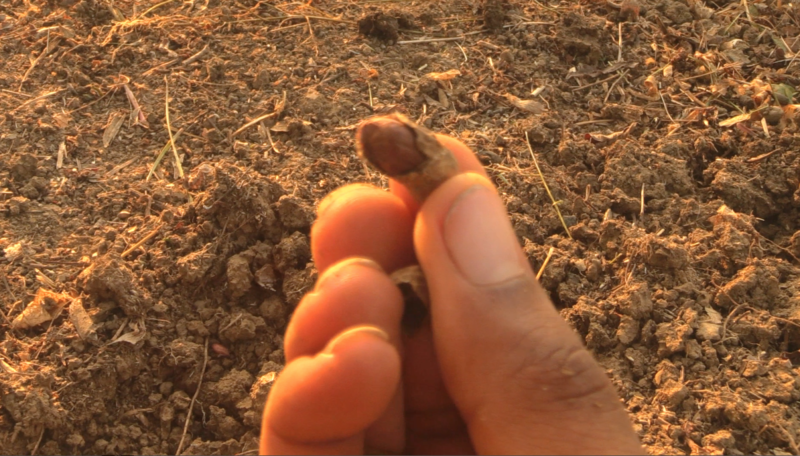 The peanuts are pulled up easily, and with a twist the dry shell falls away to reveal a small, brown nut inside. The nuts often appear in clusters of two, but with luck three nuts can be found in one, which merits a special song. 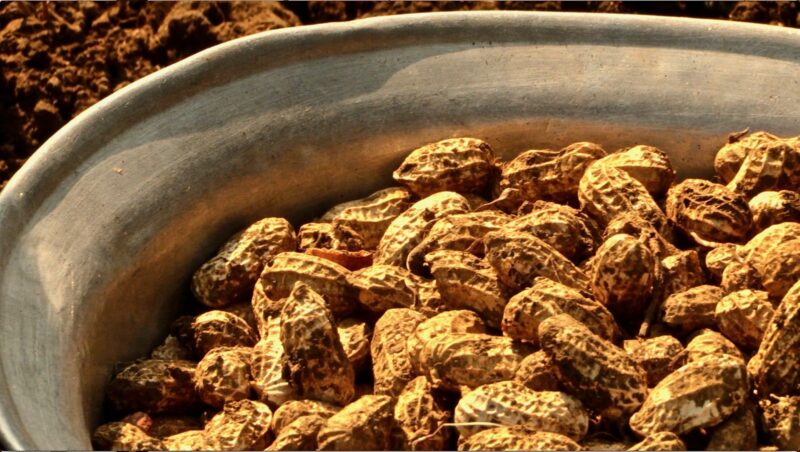 The individual nuts are gathered in aprons, shirts, bags, and eventually tossed into the ponchera, a large metal bowl usually made from aluminium.

Once the peanuts have been collected, they are spread out to dry. They then undergo a process of sorting where dry shells are removed, and sprouted nuts removed for replanting. 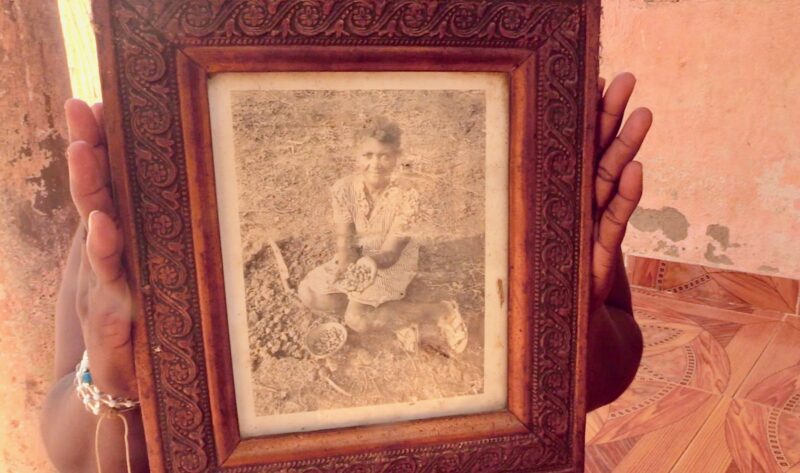 Women in San Basilio de Palenque have been peanut farmers for generations. Here, one palenquera woman holds up a framed picture taken of her relative by Colombian Anthropologist Nina de Fridermann in 1978. The image displays a woman holding peanuts in her palm while a gourd full of the nuts lays at her side.

Once dried, shelled, cleaned and washed, the peanuts are ready to be processed for consumption. They can be boiled with salt or roasted, but the preferred way to consume them in San Basilio de Palenque is ground with raw cane sugar and salt and hand rolled into spheres, called bolas de maní (peanut balls). 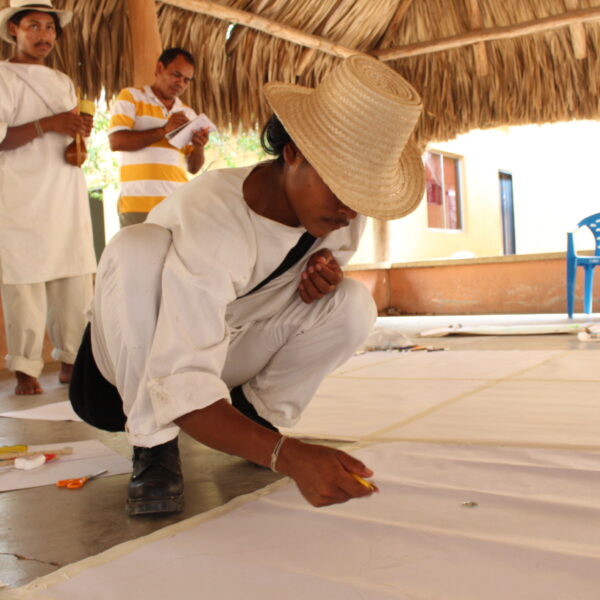